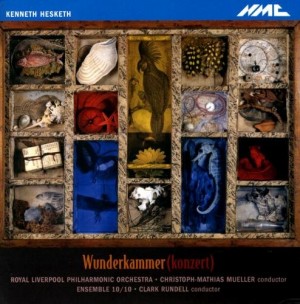 The first full-length CD devoted to the music of Liverpool-born Kenneth Hesketh.The title work Wunderkammer(konzert)is a three movement chamber concerto which reflects the character of the wunderkammer,or Cabinet of Curiosities that flourished between the 16th to 18th centuries.Graven Image is inspired by the medieval Memento Mori,a painting or sculpture which seeks to remind its owner of the brevity of life and At God Speeded Summer's End uses melodic ideas influenced by the structure of Dylan Thomas's poem Prologue.In Thomas own words:The first and last line rhyme;the second and last but one;and so on and so on.Why I ackrosticked myself like this,don't ask me.Kenneth Hesketh began composing whilst a chorister at Liverpool Cathedral,later studying at the Royal College of Music.He attended Tanglewood in 1995 where he studied with Henri Dutilleux and was subsequently awarded a scholarship from the Toepfer Foundation at the behest of Sir Simon Rattle.He is now a professor at the Royal College of Music and honorary professor at Liverpool University.